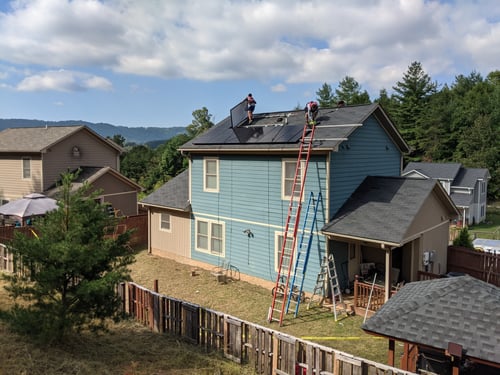 A total of 180 property owners signed contracts to advance toward owning a system through the community-led discount solar energy purchase program. That’s the equivalent of 2,009,732 kWh produced annually and an estimated $251,215 in annual utility bill savings for owners of their new rooftop solar energy systems.

Solarize Asheville-Buncombe was developed and launched by a coalition of local organizations, community members, and government to help make this form of renewable energy more accessible and affordable to all.

Community-wide, the campaign added more than $4.69 million in new clean energy development and eliminated as much as 2,689,753 Ibs of CO2 annually from the local environment. This is equal to removing as many as 1,344 tons and 163 cars from local roadways for one year. Added battery/energy storage as a result of the campaign equaled 125 kWh.

“Asheville was among 20 U.S. communities that took part in RMI’s Residential Solar Cohort program in 2021,” said Ryan Shea, senior associate at RMI, an independent nonprofit based in Boulder, Colo., focused on transforming energy systems globally. “Their effort resulted in the most resident participation and rooftop solar installed out of any campaign, largely due to their effective community-led outreach and the dedicated local government and community partners.”

“The Solarize Asheville Buncombe campaign provided an incredible jump-start in 2021 toward increasing renewable energy use in our community,” said Brownie Newman, Buncombe County Commission chairman. “The campaign was another important pathway to meeting our goal of 100 percent renewable energy for county operations by 2030 and for the entire community by 2042.”

Said Asheville Mayor Esther Manheimer: “The City of Asheville is proud to partner with Solarize Asheville-Buncombe in supporting our community to take proactive climate action. While the City is working diligently to address our internal carbon reduction and renewable energy goals, it is inspiring to see the enthusiastic embrace of the Solarize campaign as residents strive to address our climate emergency. This is just one energy solution that will get us towards our community-wide goal of 100 percent renewable energy by 2042."

Added Sam Ruark, executive director of the Green Built Alliance: “It will ultimately take the combined efforts of governments, nonprofits, businesses, and all citizens to reduce our collective fossil-fuel footprint. By working together in partnership with multiple organizations and stakeholders, Solarize Asheville Buncombe exceeded expectations and was a significant leap forward for renewable energy in our community.“

From its conception by a coalition of local organizations in late 2020 to its community launch in April 2021 and through its completion on Oct. 31, the Solarize Asheville Buncombe campaign was designed to spark new interest in solar power by communicating its benefits and reducing its entry price. By purchasing together, over the lifespan of their systems, homeowners who added rooftop solar via Solarize will save more than $8.35 million over 25 years in utility bill costs for their households. Much of this benefits the local economy as well as contributes to the community’s climate strategy.

Free System to Nonprofit: Another key benefit of the campaign’s success is a solar energy system to be provided free to a worthy local nonprofit organization. This system will help reduce ongoing electricity costs, freeing up funds for the recipient organization to help achieve its mission more economically.

“Our aim is to prioritize the needs of historically-marginalized community members throughout the transition to clean and renewable energy,” said Sophie Mullinax, Blue Horizons Project manager. “In keeping with this goal, the local Solarize Asheville-Buncombe Steering Committee intends the donated system to increase a local nonprofit’s ability to serve community members in need.”

To nominate a nonprofit organization’s solar energy project for consideration here, visit SolarizeABC.com. Interest forms will be accepted until Dec. 13, 2021.

In addition to initiating a Solarize campaign, the local coalition developed and launched Neighbor to Neighbor Solar. This initiative extended beyond the Solarize campaign by offering a grant program to further support those identified in need, bringing affordability, access and equity to others as a means to lower their household energy burden. Some 12 families have qualified to receive rooftop solar for their homes. Fund-raising is currently occurring to increase this total. For more information, go to www.solarizeabc.com.

Green Built Alliance is a 501(c)(3) nonprofit with a 20-year history of advancing sustainability in the built environment through community education, measurable standards and regional action. The membership-based nonprofit is making a difference locally and regionally through numerous community initiatives and resources. The nonprofit makes sustainability more accessible to the surrounding area through its efforts distributing 25,000 copies of the annual Green Building Directory; coordinating the Appalachian Offsets carbon-offsetting program; managing Blue Horizons Project and Energy Savers Network to help create our region’s clean-energy future; and administering green-building certifications such as Green Built Homes. Learn more or get involved by becoming a member or making a donation at greenbuilt.org/donate.