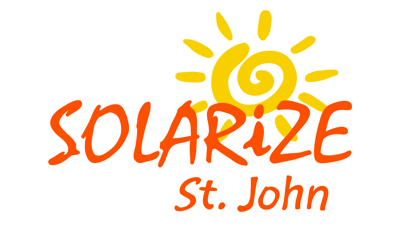 Local residents are eligible to sign up for a free solar evaluation and potentially receive up to $2,750 toward a solar energy system for their property. Up to 10 St. John property owners will be eligible for solar power and battery storage discounts through this 2.0 version of the
campaign.

Like during 2019, this year’s campaign remains “local only” – all installation companies involved are based on St. John.

Last year, local organizers of Solarize St. John – joining forces with SolarCrowdSource – launched the first-of-its-kind program on the island using a hybrid of a traditional Solarize program (bulk, cooperative purchasing among many property owners rather than individual purchasing) and discounts created by a generous donation to seed the initiative.

Rebates from a 2020 donation again enable local installer firms on the island to significantly discount their customized installations. The Solarize St. John team closely coordinates with these local solar companies to lower the expense of solar and battery power by filling residential orders that would not have occurred otherwise at a higher cost.

The impact in 2019 was measurable. More than 100 local property owners signed up for a free solar evaluation after hearing about Solarize St. John throughout the year. Via the 2019 program, more than 400 solar panels and 21 battery systems were installed on homes of 22 residents stretching from Great Cruz Bay to the far East End on St. John. This resulted in an annual reduction in carbon emissions into the environment equivalent to 87 pickup trucks every year.

The effort translated into over $600,000 in new clean energy development — and ultimately big savings on electricity bills, improved energy resiliency locally and meaningful reductions in CO2 emissions for decades to come.

“Like last year, I want to continue to see the use of solar power expand on St. John,” said lead Solarize St. John donor Brad Camrud, a part-time St. John resident and long-time user and supporter of solar energy on the island.

“It was gratifying that so many responded positively to last year’s campaign and received support for their carbon-reducing systems,” Camrud said. “This year, we’re once again aiming to cover the island with the opportunity to add solar.”

A federal tax credit of 26 percent that decreases to 22 percent at the end of 2020 complements this year’s Solarize rebate incentive. In addition, resumption of WAPA’s net billing policy, which provides renewable energy bill credits, will appeal to those who have considered solar power
previously but didn’t want to fully exit the power grid.

In addition to marketing the program and facilitating installer and residential contracts, Solarize St. John works with the local non-profit Island Green Living Association, a 501(c)(3) nonprofit organization, to administer rebates to those who sign solar energy contracts.

For more information or to sign up for a free solar evaluation, visit: https://www.solarizestj.com

To donate to future efforts to lower renewable energy costs to vulnerable families within the U.S. Virgin Islands, visit: https://www.solarcrowdsource.com/campaign/st-john/

About Solarize St. John:
Solarize St. John is a comprehensive grassroots initiative to strategically expand the penetration and breadth of solar and battery installations across all property types and demographic profiles on the island. Solarize St. John launched in January of 2019 and works in support of Island Green Living initiatives via Solar Crowdsource. Solarize is a national movement that started in Portland, Ore., in 2009, and Solarize St. John is the first such program in the USVI. Solarize programs are designed to make going solar more affordable and straightforward for a short campaign period in defined communities that adopt the program.