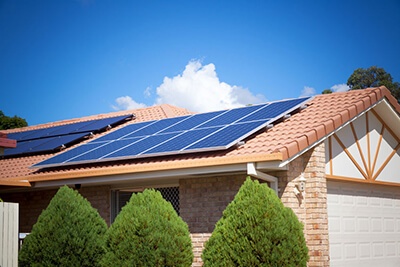 Let the Sunshine In: UWG Partnering with Solarize Carrollton-Carroll

Members of Solarize Carrollton-Carroll want local residents to live on the sunny side of life – literally.

The organization – of which the University of West Georgia is a coalition partner – strives to substantially increase the number of solar energy installations in Carrollton, Carroll County and adjoining communities by making solar energy systems more affordable and accessible in a way that can be sustained beyond the Solarize Carrollton-Carroll campaign.

Brendan Bowen, associate vice president of campus planning and facilities for UWG, recently announced the university’s status as a coalition partner in the effort, saying the partnership demonstrates the university’s commitment to the community to promote healthy, sustainable living.
“Our commitment to sustainable practices is so important to the university, it’s named as an imperative in our current strategic plan,” Bowen said. “Over the past several years, we’ve tried to find ways to use a practical approach to sustainability, and that has served us well. We want to demonstrate that commitment to sustainability in ways that really deliver results, and solar power is one of those ways.”

To show its commitment to the cause, UWG will install a solar power system on its Carrollton campus later this year – and solve another problem at the same time.

“Our Technology-enhanced Learning Center (TLC) has a very nice deck off the second floor that looks out on the heart of campus, but in the warmer months, we don’t see many people enjoying the plaza because there’s no protection from the sun,” Bowen said. “This year, we proposed a canopy that will provide approximately 1,000 square feet of shade for the deck, and we’re going to install solar panels on the top of that canopy to take advantage of solar energy that’s present there.”

The system will provide 20 kilowatts of solar electricity – enough to power two or three small homes, Bowen said – which will be connected back to the main electrical system at the TLC to serve as an auxiliary power source to the main source of power.

John Hinman, a Carrollton resident and UWG alumnus who serves as chairman of the Solarize Carrollton-Carroll steering committee, said the initiative got its start as a small group of local community members interested in doing something to make a difference or give back to the community. Another interest all the members of that small group had in common was solar energy.

“We made contact with Solar Crowdsource, an organization that serves as administrators for solarizing efforts across the nation, with approximately 300 programs completed in the United States,” Hinman said. “The program is in full swing now, with evaluations occurring every day and homeowners buying solar energy systems.”

The university also has several faculty and staff members on the group’s steering committee, including Bowen; Dr. Hannes Gerhardt, director of UWG’s Center for Sustainability; and Dr. Patrick Erben, a professor in the Department of English at UWG.

Hinman said owners of homes, businesses and farms in Carrollton and the surrounding communities are encouraged to take advantage of a free evaluation performed by Creative Solar to see if solar energy will lower their energy costs with no pressure or obligation. Doing so could potentially change electricity from an expenditure to an investment, Hinman said.

“This is not a movement to ‘cut the cord’ or ‘go off the grid’ or anything like that,” Hinman said. “Our residents will still be dependent on Carroll EMC or Georgia Power to provide some of their power needs, particularly at night after the sun has gone down. During the day, though, most homes can operate only on solar energy, and it’s a seamless exchange between the solar power system and the main grid to which homes are connected.”

If a solar system isn’t generating enough power for a home, the home will be supplemented by the utility company, Hinman said. But if a system generates more than a home needs, the surplus will flow back into the grid, leading to a credit on the homeowner’s utility bill for the energy he or she sold back to the power company.

Hinman, who received his master’s degree in psychology at UWG in the late 1970s, said he often wakes up wondering why the main source of electricity generation comes from burning coal.

“Historically, burning coal has been cheaper, more reliable, consistent and plentiful, but today solar is competitive in all of those areas, especially when it comes to cost,” Hinman said. “If a home or business chooses to invest in storage batteries to store solar energy, that makes the alternative source even more reliable and dependable.”

“We know burning coal pollutes the air, water and land,” Hinman said. “The time has come for us – both locally and nationally – to promote the shift to cleaner energy, and there’s nothing cleaner than the sun’s rays.”

Bowen said the chief benefit of solar power is a simple one to explain: it’s always on while the sun is out.

“We’re excited to be part of this initiative and look forward to seeing more success in the coming months with our first major solar project here on campus,” Bowen said.