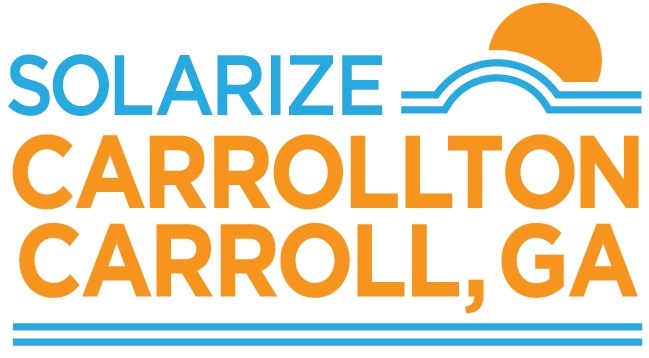 Carrollton, GA — A small group of residents in Carrollton and Carroll County have tapped into something that may surprise many – a big interest in alternative sources of energy. In an effort to bring more solar to the City of Carrollton, GA and Carroll County, the group organized a petition to build support for a bulk-purchase program called Solarize Carrollton-Carroll. With a goal of 50 signatures within 30 days, the group reached its goal within 24 hours.

“Solarize programs are like the Costco of solar,” said Don Moreland of Solar Crowdsource, an online platform that hosts solarize and crowdfunding programs. “By leveraging the power of the crowd, we can purchase in bulk and achieve savings for an entire community in one program,” he said.

Georgia ranks 8th in the country for installed solar capacity but the majority of the energy we use in our homes still comes from coal, gas and nuclear power plants. Community Solarize programs in Athens and Decatur-DeKalb Co. work to change that. The two predecessors to the proposed Solarize Carrollton-Carroll program installed over 200 rooftop solar arrays and with added capacity of over 1.3 MW of solar electricity. There are currently eight solar installations totaling 43kW in Carroll County, according to georgiaenergydata.org.

“We are incredibly thrilled with the response so far,” said John Hinman, one of the community members behind the effort. “We knew we had a good chance of achieving our goal but to do so within 24 hours says something about Carrollton and Carroll County,” he said.

The organizers of the petition will hold a solar town hall meeting and seek competitive bids from solar contractors later this fall and launch a Solarize program for residents, local governments and businesses to sign-up for a solar evaluation by early 2018.